The Beginning of the Youth Group 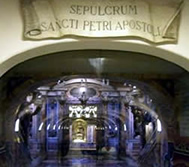 In 1983, Holy Year of the Redemption, Fr. Rafael Alonso, founder of the Home of the Mother, felt that the time had come to begin the male branch of the Home of the Mother of the Youth, whose feminine branch had begun the year before. So, on the 27th of December, feast day of St. John the Evangelist, seven boys made their first commitments at the tomb of St. Peter, as a sign of fidelity to the Catholic Church in the person of the Pope. It was the feast day of the evangelist who received the last gift from the Heart of Christ: his own Mother. “Woman, behold your son. Son, behold your mother. And from that hour the disciple took her into his own home.” (Jn. 19, 27-28). 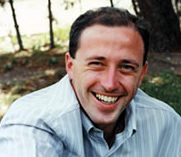 Some of us, members of the youth group, through prayer and spiritual direction, felt called to a vocation of total donation of our lives as priests, consecrated to the charism of the Home of the Mother.

In Fatima, on January 3rd, 1987, the founder Fr. Rafael Alonso and Félix López consecrated themselves privately to the Inmaculate Heart of Mary. This step in the heart of Fr. Félix was the moral foundation of the Servant Priests and Brothers of the Home of the Mother.

Foundation of the Servant Priests and Brothers 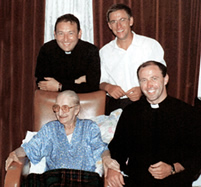 On the 8th of September, 1990, feast of the Nativity of Our Lady, three young men made their commitments as “Servant Brothers of the Home of the Mother” in the chapel of the Servant Sisters’ first house in Zurita (Cantabria). For the first couple years, they lived in Burgos, studying theology in the Northern School of Theology, beginning preparations for the priesthood, and strengthening the first community of Servant Brothers.

Every weekend we traveled to Santander to spend time with the founder and to grow more in the charism. They were years of intense joy, of unwavering hope, and of profound trust. They were yars lived very close to Fr. Rafael and to Mamie.

Desiring to receive the approval of the Church for the life we were living, we spoke with the Bishop of Cuenca, His Excellency José Guerra Campos, who paternally manifested his openess to approving our new community. He ordained the first priests of the Servant Brothers.

In 1993, Fr. Felix Lopez was ordained a priest, the first Servant Brother to receive the grace of the priesthood. Fr. Juan Antonio Gomez was ordained in 1995.
On the 26th of November, 1994, Bishop José Guerra Campos of Cuenca established the Servant Priests and Brothers of the Home of the Mother as a Public Association of Faithful, Religious Institute in Formation.

Our Work for the Kingdom of God

For several years, we tended to the needs of parishes in towns in the Diocese of Cuenca: Alcantud, Pozuelo de la Sierra, Arandilla del Arroyo, Vindel, and Valdeolivas. 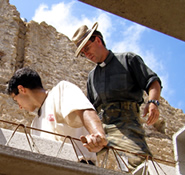 Our novitiate is currently located in the house that we’ve spent the last few years remodeling, in Las Presillas, Cantabria.

We collaborate in the translation of HM Magazine, as well as in the drawings and design of HM Zoom+ magazine for children.

First Community Outside of Spain

In 2003, a new community was founded in Florida, USA.  Some of our priests worked as chaplains on Ave Maria University’s campus in Florida.  This was the first community that we founded outside of Spain. 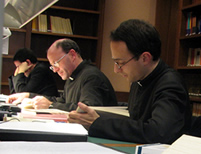 Until 2006, the community of students resided in Burgos, Spain, and studied in the Theology School there.

At the beginning of the 2006-2007 school year, with the permission of the Bishop of Cuenca, His Excellency Jose M. Yanguas, the house of theological formation was transferred to Rome. There, we received the recognition for a house of our Association by the Vicariate of Rome. Our students attend courses in Philosophy and Theology at the Pontifical University of the Holy Cross. We wish to prepare ourselves intensely to serve the Church with fidelity and to give responses to the questions that trouble mankind today. 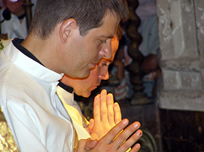 On July 7, 2007, Fr. Henry Kowalczyk and Fr. Dominic Feehan were ordained to the priesthood by Bishop Jose M. Yanguas.

Our community is composed of members of six different nationalities. Our desire is to open a house in mission countries as soon as possible.

In October 2010, the Archbishop of Pamplona, Spain, Monsignor Francisco Pérez, entrusted the parish of Urroz-Villa and 18 surrounding parishes to us.  A community of Servant Brothers lives in the town.  One of our priests balances his time between studying for his Licentiate in Theology and attending to the needs of the parishes, aided, of course, by the other brothers, who are also continuing their studies in philosophy and theology.

In October 2011, the archbishop of Valencia, Spain, Monsignor Carlos Osoro Sierra, entrusted the parish of “Saint Dionysus and Saint Pancracio” to the Servant Brothers.  One of our priests also works as a chaplain in the Clinical Hospital of Valencia.

Little by little, a few other brothers have been ordained priests.  Currently 8 of us are priests and some us are working on obtaining our Licentiate or Doctorate in Theology, in addition to our apostolic work.

In October 2012, the Lord permitted us the possibility of opening our first missionary house.  The Archbishop of Guayaquil, Ecuador, Monsignor Antonio Arregui, invited our community to take charge of the apostolate of the parish of Our Lady of Loreto.  Two priests and two brothers fulfill their apostolic mission there through confessions, spiritual direction, catechism classes, parish groups, house blessings, evangelization of those who are far from the church, and, in addition, they help out in other parishes and other diocesan needs, in evangelization and administration of the sacraments.

Looking at the Servant Brothers of the Home of the Mother, one easily understands the truth of the following words of St. Paul, “God chose the foolish of the world to shame the wise.” (1 Cor. 1:27)  However, knowing that we are poor and useless instruments, we experience the great love of God, who has called us through a special grace of predilection.   Despite our poverty, the Lord continues to bring this work through; it is the gift that He wishes to give to his Mother. 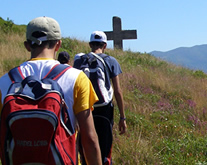 Our apostolate is mainly, though not exclusively, focused on the youth.  Each year we have summer encounters for boys.  Last summer we held encounters in Spain, the United States, and Ecuador.  We also organize pilgrimages to Marian Sanctuaries and other sites of pilgrimage.   We exercise our priestly ministry through additional activities, such as spiritual exercises, according to Saint Ignatius of Loyola, and retreats for youth and for families.

During vacation times, we work on building our houses. This desire to work with our own hands is a sign of our poverty and desire to imitate Christ.

Every community carries out the apostolic work specific to the mission to which it is called. The Servant Brothers and Priests are not defined by what they do, but by who they are. Everywhere, we are called to live our consecration to God, through the Heart of Mary, living our specific missions.