Get-together in Loeches for boys in the Home of the Mother of the Youth on March 8th-10th, 2019. 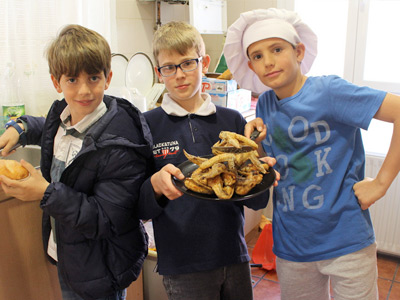 On Friday, March 8th-10th, the boys of the Home of the Mother Youth got together in Loeches, Madrid. Altogether we were 25 boys plus the brothers. We started with Mass and then had dinner. We laughed a lot because of the jokes we told during dinner. Afterward, we watched some Catholic Stuff videos, and, to finish the day, we played a night game. We really did everything!

Saturday morning we went to Mass before breakfast so that afterward we would have time to prepare for the small retreat for the younger boys from the catechism classes. The HMY members were the couselors for the younger boys in the different stations for the games. When we finished, we had lunch (by the way, the brother’s cooking is amazing), and later we prayed the rosary, played soccer, had a talk, went to adoration, and watched a movie with pizza and popcorn. I liked the movie, A Forbidden God, which tells the story of the martyrs of Barbastro.

Sunday morning we played sports, ate, and watched some videos from past retreats. It’s always good to remember those great moments. What I liked the best was playing soccer (I love sports) and, above all, the times of prayer with the Lord. I can’t wait for the next retreat