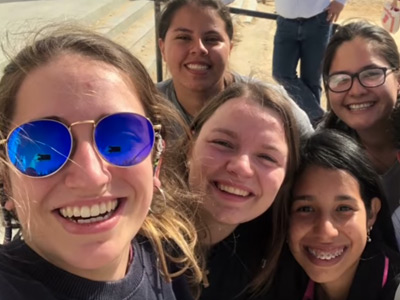 On March 15th, 12 girls and 6 Sisters from Valencia went on a pilgrimage to Seville. Fr. Rafael, Founder of the Home of the Mother, gave us a motto for our trip: "like a tree planted by water," and with this thought in mind, we began our pilgrimage.

When we left on the 15th, we realized that, on the way to Seville, we would pass through Córdoba, home of the famous Christ of Miñarro, we thought at first that it would be a crazy idea to stop and see it, but despite being a crazy idea, we considered it a crazy idea worth doing. As soon as we arrived in Córdoba, we made our stop to visit the image and pray there. The Lord had prepared a surprise for us there because when we left the Church we met a Sister from the Hospitallers of Jesus the Nazarene, who invited us to her house to be able to venerate the relics of their founder, Blessed Christopher of Saint Catherine. This was a great way to begin our Pilgrimage.

When we arrived in Seville, our Sisters from the community of Alcalá de Guadaíra were waiting for us, as well as two Sisters who came from Santander with a group of seven girls from Ecuador, who joined us for the pilgrimage. The Sisters happily welcomed us and had prepared a delicious dinner. 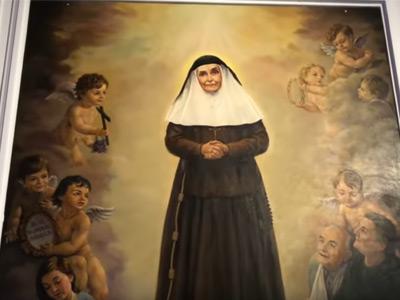 The next morning we got ready to visit the city of Seville. We began our day with prayer, lead by a Sister who gave points of meditation. Next, we got ready to head out into the city. The first place we visited was the convent of the Sisters of the Company of the Cross, which is where Sr. Angela of the Cross buried. We were welcomed by one of the Sisters who gave us a tour of the convent showing us things that Sr. Angela of the Cross used while telling us about the life of the saint. We were all very impressed by the life of Sister Angela, but also by the life of these Sisters who today continue to show the world the spirit of their foundress, by comforting those who are most in need and encouraging them to offer up their sufferings for God.

At the end of the visit, Sister Maria Luisa took us to the chapel where the saint's incorrupt body is so that we could pray in front of the saint and place our intentions before her. When we left the Convent of the Sisters of the Company of the Cross, we went to visit the Cathedral and attend Mass there. Mass was held in the Royal Chapel, which is where St. Fernando the King is buried, giving us the opportunity to pray to him for Spain. We were all very impressed by the Cathedral, but we were even more impressed to see all the work gone into building a place for worshipping the Lord.

After visiting the Cathedral, we went to the Plaza de España for a picnic before continuing our journey to the Triana district. There we visited the Virgin of Triana, the Estrella (“Star”)— also called the Brave— and an image of Christ called “the Cachorro.” We felt that it was a special grace to go to all these places and see the devotion and love that people young and old have for Our Lord and His Mother.

To end the day we went to the church where the Virgin of Hope of Macarena is. We were really excited to go there because we wanted to see Our Lady, and little did we know, she had prepared a surprise for us. Many of the girls on the pilgrimage had never seen a Holy Week procession in Seville and wanted to see one. After seeing Our Lady, much to our surprise, there was a procession going on in the street where we had parked our cars, so we saw it close-up. This joyful surprise ended our visit to Seville, a city where Our Blessed Mother bestowed many graces upon us. 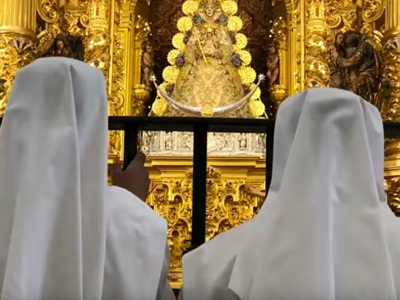 On Sunday, we had scheduled a visit to El Rocío so, after we finished our breakfast and headed out. We went to Mass there, which was quite impressive because there were many “rociero" groups that had gone on pilgrimage that day to see Our Lady. We were able to hear “rociero” songs, which was a gift for us because for the majority of us it was the first time that we participated in a “rociera” Mass. What impressed us the most was the immense love that the people have for Our Lady. It was so touching to see people sing and recite poems to Our Blessed Mother or to see mothers teaching their young children to call Our Lady “beautiful”. For all of us on the pilgrimage, the day we visited El Rocio was very special, because we experienced Mary’s presence in a very close and motherly way.

On Monday, the 18th, we got up early in order to set off for Granada, where a friend of ours was waiting in order to show us the chapel where Queen Isabella the Catholic is buried. There, we prayed for Spain before heading off to visit Blessed Fray Leopoldo of Alpandeire’s and St. John of God’s tombs. We prayed there and then went to the church of Our Lady of Perpetual Help for Mass, followed by lunch in La Alhambra. After that visit, we went to Macael, where we have a community of Sisters. There we had dinner with girls and women who are members of the Home of the Mother and stayed there for the night.

The next day, March 19th, the Solemnity of St. Joseph, we headed toward Valencia after breakfast, but before returning home we went through Murcia to visit Caravaca de la Cruz where we had Mass, which was also a Pilgrim's Mass, so we could kiss the relic of the True Cross. For lunch we went to the Shrine of Our Lady of Hope in Calasparra, followed by an assembly to talk about our experiences and sing songs. For everyone, the trip was a special grace, filled with small graces from Our Lord and Our Blessed Mother. We entrusted ourselves to them on this trip, and we asked them to help us grow closer to them, but also so that we can bring others to them.

With that, we wish to always be "like a tree planted by water," in such a firm way that we never lack the water of life, which is Jesus Himself.