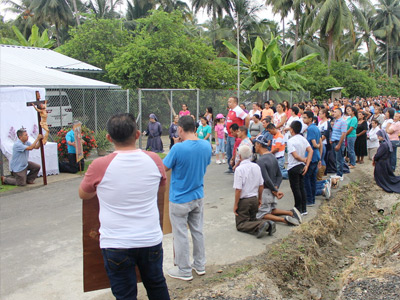 Once again the Lord has allowed us to celebrate the most important days of the year, the Easter Triduum, in Playa Prieta.

The encounter began for some at 10:00 a.m. with the Chrism Mass at Pius IX Church in Portoviejo, Manabí. Afterward, everyone arrived at Holy Family Educational Center in Playa Prieta, where the events of the encounter were going to take place. The attendees were from Chone, Calceta, Playa Prieta and the surrounding area. We ate lunch then started with the first talk given by Fr. José Javier, Servant Priest of the Home of the Mother. Following the talk, we had time for discussion in groups, prayed the Rosary and had an assembly. At 7:00pm, along with the townspeople, we had the Mass of the Lord's Supper. After reposing the Blessed Sacrament in the altar of repose we had dinner and then a holy hour with the Lord. We took turns to accompany the Blessed Sacrament throughout the night. It was a very special moment for many.

Throughout the encounter, the children and teens also had their activities according to their age in order to make the most of these very special days. With games, videos, formation meetings and other activities, they understood the meaning of Easter in a deeper way and the importance of comforting the Heart of Jesus. 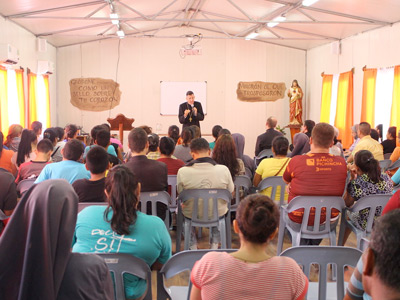 On Friday we started off early with a Via Crucis at 7:30 a.m. throughout the town. Upon returning we had prayer, chores and then the second talk. This one was given by Sr. Rocío Galmés, Servant Sister of the Home of the Mother. We had group meetings and then ate lunch. In the early afternoon, we saw the movie The Passion by Mel Gibson. It was truly a grace because immediately following we had the service of the Passion of the Lord with the film fresh in our minds. After the service, we prayed the Rosary, had dinner and an assembly where we shared experiences from the day. It was very enriching. Then, as all of us were tired, we went off to rest for the night.

On Saturday morning after breakfast, we prayed while gazing upon an image of Jesus dead on the cross. Following chores, we had the third talk, given by Bishop Eduardo Castillo, Apostolic Administrator of the Diocese of Portoviejo. At the end of the talk, we connected via Google Hangout with the other Holy Week Encounters in Spain, Italy, Ireland, the United States, and Guayaquil (Ecuador).

After the Hangout, we had lunch. In the afternoon we watched a presentation about the Virgin Mary. After praying the Rosary we had a quick dinner because it was almost time for the Easter Vigil. Like Thursday and Friday, many people from the town participated in the Paschal joy with us. After Mass, we ate sweets that the little ones had prepared for us and enjoyed the performances prepared by the different groups. The young men put on a very funny performance, that taught a good message. They really have a lot of creativity. After the festival, we all went to rest.

On Resurrection Sunday we had Mass at 10:00 a.m. after breakfast and prayer. Then we had the final assembly to talk about the encounter and share our experiences. Several people shared their testimony about how the encounter helped them. We hope that the graces received can bear fruits for eternal life.

After the assembly, we had time to tidy up and clean the school facilities. Then we had lunch, finished getting the last things together, and, little by little, people started saying goodbye and leaving. And, we come to the end of the 2019 Holy Week Encounter.