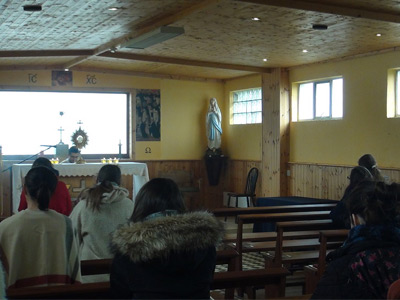 The last weekend of November, the Home of the Mother in Ireland held the first Silent Retreat (a short version of St. Ignatius of Loyola’s Spiritual Exercises) for girls in Ireland. The weekend before, the Servant Priests and Brothers held a Silent Retreat for boys. Both retreats took place in the Dominican Camp of Knockadoon, Co. Cork, a beautiful site overlooking the ocean.

Fifteen young women over the age of 18 attended the Silent Retreat held from Friday, November 29 to Sunday, December 1, which happened to be the First Sunday of Advent. What a beautiful way to begin the Season of Advent, opening wide our heart to the Lord and to whatever He might ask of us!

The retreat began with Holy Mass on Friday evening. Afterwards, one of the Servant Priests gave the first meditation to the girls, on St. Ignatius’ “Principle and Foundation”: what we have been created for by God. From the very outset of the retreat, the Lord blessed these girls—many of whom had never attended a Silent Retreat before—with the grace of entering into an atmosphere of real silence. 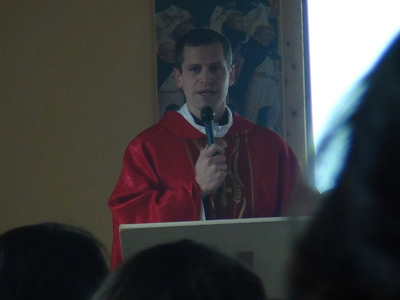 On Saturday, November 30, after Morning Prayer and breakfast, a Servant Priest exposed the Blessed Sacrament on the altar and gave a meditation on sin. During the rest of the morning the girls had time for personal prayer in front of the Lord and also the opportunity to make a good confession. The morning ended with Holy Mass, and afterwards we had lunch. During the meals we read the book “You Have Leukemia” by Fr. Colum Power, which the girls enjoyed very much.

The Servant Priests left the Blessed Sacrament exposed once more on the altar before they left that afternoon, and so the girls were able to be face to face with Jesus all that day, all night, and the next morning until the retreat was over. As Carlo Acutis expressed so eloquently, just as no one can be beneath the sun without receiving the effect of its rays, neither can one be in the presence of Jesus in the Eucharist without being burned by the fire of His love. Such a prolonged time in front of the Blessed Sacrament could not possibly leave the hearts of these girls untouched!

For all of them, it was an enormous blessing to have spent so much time in silent adoration before the Lord. During the afternoon, the Servant Sisters gave a meditation on St. Ignatius’ “Two Banners” and a talk on grace, and there was more time for personal prayer. We also prayed the Rosary together with songs to Our Blessed Mother. That evening after dinner we prayed together the 1 st Vespers of the 1 st Sunday of Advent and lit a candle on our Advent wreath in front of the altar. We then had a beautiful Holy Hour with meditations on the theme of the retreat: “The Lord Himself will fight for you; you have only to be still” (Exodus 14:14). Afterwards, since Jesus was present with us in the monstrance, we proceeded to have turns of adoration during the whole night, to accompany Our Lord in His Passion. The adoration during the night was another immense grace for the girls. 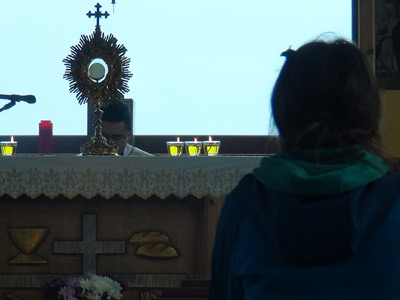 The next morning, Sunday, a Servant Sister gave another meditation on the encounter of St. Peter with the risen Jesus, and after more time for personal prayer there was a talk on “The Four Last Things (Death, Judgment, Heaven, and Hell)”. One of the Servant Priests returned to continue hearing the girls’ confessions and to celebrate the final Mass of the retreat. In his homily—which also did these souls much good—he strongly encouraged the girls to surrender themselves totally to Christ and not to live a double life. We then finished with lunch together, talking and sharing the experiences of the retreat. Many of the girls were surprised that they had been able to live the climate of silence so well. All of them were strongly impacted by everything they had received from the Lord, and some left that day with their lives truly changed.

Praise the Lord and Our Blessed Mother for so many graces showered down upon these souls during one short weekend! We pray that those who attended may remain faithful to the resolutions they made on the retreat, and that they may definitively choose to fight under the banner of Jesus Christ and His Virgin Mother against sin and mediocrity.

If you are reading this article, say a prayer to Our Lady for that intention!