An man who, until a few months ago lived in the Sisters' home for the eldery, died on Sunday. As he was seriously ill, he had recently been moved to another residence. He died on Gaudete Sunday and we hope, in God's infinite mercy, that his encounter with the Lord has truly been joyful. He recieved the anointing of the sick before dying and we were able to pray the Divine Mercy chaplet with him several times.

hen we made our last visit, we found him alone. We prayed awhile with him and then placed by his bedside a holy card of Our Lady and another of the Divine Mercy. We have great trust in the Lord, but we ask also for your prayers. He was aware that he was dying. On one ocasion we said to him, half jokingly, that we had an errand for him to run. He nodded his head as he could no longer speak. And we asked him if, when he sees Our Lord and Our Lady, he could give them a kiss on our behalf. He smiled and nodded his head in response. Pray for him and for his wife, Loli. 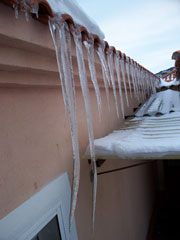 Here we have been experiencing some impressive snowfalls. The elderly folks in our residence informed us that they'd heard news that it was the biggest snowfall in Cuenca for the past 5 years. The children in the town were happy as school was cancelled. Yesterday we had no other choice but to leave the house to go shopping on foot, because we could not get the car out. It was really very funny because we took the shopping cart and carried an umbrella as a shield from the strong cold wind. As we went outside, we didn't know whether we were walking on the path or not. What is most danterous is the outdoor staircarse that leads up to our house (we have now covered it with thick layer of salt) and the icicles that hang from our roof. Some are almost 1.5 meters long. We include some photographs so that you can see for yourselves.

We also announce that we have inaugurated a Children's Mass in Priego, a novelty in this village, with Fr. Paco, a new priest who has come to the parish. The parishioners are now more participative, the children prepare the intercessions, and we sing with them and Fr. Paco asks them questions (which the older people also enjoy).

We are now beginning the preparation of Christmas gifts for our "grandparents." They're writing their letters to the three Wise Men (as is the tradition in Spain) and they throw them in a mailbox that we have prepared for this purpose.

May God bless you all and Happy Advent, even though there is not much left!
The Sisters in Priego
{jcomments on}