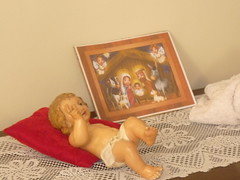 "We ask for “posada” (room in the inn) for the love of God…" The popular song called "Posadas" begins with these lyrics.  During the Christmas novena in Ecuador, the song is sung from door to door, while Mary and Joseph ask for "posada," until they are finally let in by the innkeepers. Then, once everyone is inside the house that offered the posada, the Novena begins with prayers, carols and a brief talk to explain something related to Christmas. The sisters and some of us girls had the grace of participating in some of these novenas. And so began our Christmas.

On Sunday, December 21, we wanted to celebrate Christmas with the girls and the adults of the Home of the Mother, so we got to work preparing different events. At 3 p.m. we met with the girls. We divided them into groups and began a Christmas game in which they had to find different things that a baby needs when it is born and make a basket with all these things for the Child Jesus. They had to find things that were hidden around the whole house. When all the groups were able to gather all the things for the Child Jesus, then we got together in the living room and there, various members of different groups, offered each article to the Child. 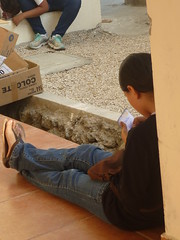 A very intense moment occurred when all the girls were given a sheet of paper in which they had to write a letter to the Child Jesus to tell Him what they wanted: ask for something, give thanks, offer Him something… As they finished writing, they returned to the living room where we were praying the rosary and singing Christmas carols, and then a few at a time, they went to the chapel to present their letters to the Child, they left them in a box and then picked up a message from the Child Jesus that had their name on it.

To end we had a snack.

Half an hour later we had the celebration together with the adults, so we quickly put all the things back in their place, since we were going to do the same game with them. You should have seen them running from one station to the other...they forgot about everything else!

The next day, Monday, it was time for the celebration in the “Fortin”, where we teach classes at the School of the Consolata. The eighth graders prepared a Christmas Play for everybody, and later on, when all the pupils had gone home, we played the same game with the teachers, the same set of tests to get everything the Child Jesus needed.

Another highlight of our Christmas happened right on the 25th. After eating, at 3:30, we met with a group of girls and we visited the Foundation of the Suffering Man. It is a form of hospice, filled with terminally ill people and we brought them some food, music, Christmas carols and much happiness so that they could enjoy Christmas as well.