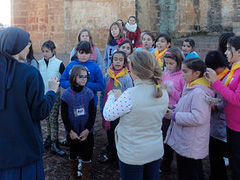 On January 24th we started a New Year of get togethers at the shrine of Our Lady of the Eagle. These get togethers have taught us many things. We started by praying in front of our patron saint. To help us, one of the sisters reminded us of the importance of the sense of self-giving and generosity in the petitions that we ask Jesus. Afterwards we had some silence to tell Jesus EVERYTHING we wanted, we blew kisses to the Virgin Mary and Jesus in the tabernacle, we then got organized and divided into two groups the hand crafts to do inside the house, because it was windy and cold. The hand crafts consisted of making dolls made with pompoms. Although they were hard to make, we were happy for having made the effort to persevere in making them.

We were blessed with the presence of one of the priests from the village who was able to come to the gathering and the girls were able to go to confession. In our get together confession is always a crucial element, and the majority of the girls take advantage of it. 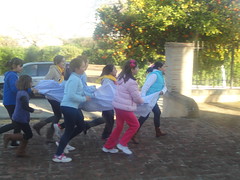 When the confessions ended and despite the fact that we had not yet completed our hand crafts, we were very hungry. Since it was still very cold outside, we ate inside although somewhat tight, but at least it was warm. At the end of the meal, we had a meeting where we talked about one of the dreams of John Bosco, whose feast is celebrated on January 31. The particular dream was on the state of the consciences in which St. John Bosco saw all the children of the oratory adding up the accounts of their consciences, and then the consequences in their souls by the manner in which they were made. We reflected on the disorder that there may be in our souls and we learned that the best way to combat it is through the sacraments of confession and communion.

After so much time indoors, we really wanted to play outside. Using the dream which we had talked about in the meeting, we played “add the account” of our teams, overcoming several tests to earn points. At the end of the game, the winning team was the first to choose sweets from a basket that had been prepared by the sisters and we took advantage of the last ten minutes to complete our hand craft. See you next month!