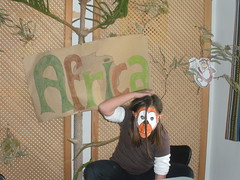 For the first time in their life the girls of Macael, Almería, have flown in a plane to the African continent to spend a day full of surprises.

On Saturday, February 7th the sisters set up the rooms with Palm trees and all kinds of branches that our girls had gotten to decorate. At 11:30 a.m. the girls began to arrive, and had to pass through the check-in point with their backpacks and receive their Passport before entering the “plane”. When they all had taken their seat, two flight attendants from the AirMary Company communicated with gestures the instructions of the flight which were heard through the intercom. They warned that if there were moments of turbulence, as sometimes happens in our lives, to buckle up, which represents our faith; that if we needed oxygen, to say the rosary because prayer is the breath of our soul and, just in case, we were presented with the best life jacket: the scapular . The captain of the airplane was Our Mother, so we were guaranteed the safety of the flight. The girls were warned to prepare for a radical climate change because while in the mountains of Macael was cold and with snow, in Sudan, Africa, the temperature was expected to be very hot. 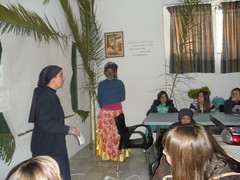 When we arrived in Africa we were welcomed by some native women of the country. Among them one stood out in particular and she introduced herself as Josephine Bakhita. Who was this woman? With the help of a projector, Josephine Bakhita explained to us how she went from being a slave to becoming a saint. Her story, of great suffering, impressed us immensely, as well as her ability to see the providence of God in her own life and to forgive those who did her so much harm. Before saying goodbye to us, the Sudanese saint encouraged the girls by saying 'If I in the midst of so much suffering could become a saint, so can you.'

Then after dividing into tribes, we had time to prepare performances for the Great African Festival that would take place at the end of the day. Each tribe kept it a secret what their performance would be so that in the Festival everyone would have a surprise. The girls prepared everything with great enthusiasm. 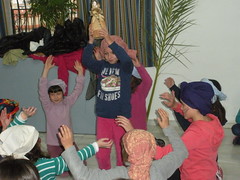 After the time to practice finished, we had another surprise! We had to prepare a delicious, authentically African dessert: worms with chocolate! The expressions of horror in the girls’ faces quickly became smiles when they began to mix the ingredients. What went into the oven in the end was a mix of worms, cockroaches, and several creative things, that truly were delicious when we ate them at the end of the day.

We were hungry by then and after the meal and remembering all the songs of the camp, Our Mother, the captain that was accompanying us during the whole trip, wanted to give us a very nice message. We saw a documentary on the apparitions in Kibeho, where the Virgin warned that to follow Christ you cannot go the way that the world teaches. Our Mother also requested several things of her children: the rosary, a living faith, atonement, love, honest prayer, conversion and reconciliation, and the renouncement to sin. When we asked the girls if they were ready to give these things to their Mother, they answered YES and we began a very entertaining game. Each tribe, led by their monitor, had to pass several tests to obtain the seven things that the Virgin had asked for in Kibeho, to then offer them to Her. 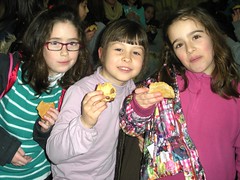 And finally ... time for the awaited Great Festival! The tribes ran to get ready while in the hall the stage was prepared for the performances. The first performance was of a group of wild African animals with their trainers: an elephant, a zebra, a giraffe and a lion. Each contained a teaching and a funny show for the girls. The next tribe who went on the stage had prepared a play about St. Daniel Comboni, the first bishop of Africa. And we ended with a very nice dance to the rhythm of Baba Yetu (the Lord's prayer sung in Swahili) in honor of Our Mother. Thanks to all for participating with great enthusiasm as it was a beautiful evening in honor of the Virgin as well!

After snacking on the dessert of 'worms and cockroaches made of chocolate’ we had to return to Spain... While we spent the day 'sweating' in Africa, in Macael it had begun to snow! That was another surprise, some could not resist but to go out and play with the snowflakes.

Despite the cold, we hope that each of the girls continue carrying their hearts the warmth of everything Our Mother taught us on such a special day.