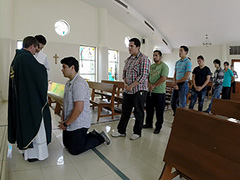 Fourteen boys participated in a Silent Spiritual Exercise Retreat at the house of the Dominican Sisters in Guayaquil on February 14, coinciding precisely with the dates for the celebration of carnival/mardi-gras. Some of them had to leave behind their loved ones on the feast day of Saint Valentine's. All the guys, except three, were from the parish of Our Lady of Loreto, and two others came from Manabí. Father Juan was in charge of leading the exercises, assisted by Brother Peter who gave some meditations. For several of these young people it was their first time doing spiritual exercises.

Every day there were three meditations followed by time for personal prayer. We also did the Stations of the Cross, celebrated Mass and ended the day with a small reflection about the Rules of Discernment of the Spirit. During our free time, we had Bibles at our disposal and different books to read on the lives of the saints. At mid-day Fr. Juan would give talks of formation on different topics like prayer, laziness, the vocation to marriage and the need to make a good selection when choosing a wife. At sunset we prayed the Rosary while taking a walk together. 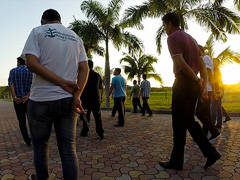 During these days some boys experienced a remarkable inner transformation. In the final meeting at the end of the exercises, the young men shared their experiences, some were impressive. One young man felt exactly the same thing that Father Juan had commented on the first night, about the tactics that the devil uses to tempt some to leave the exercises and climb on the next bus to go back home. This boy rejected the temptation without discussing it with anyone to be able to better discern other inspirations he received. Another guy told of how at the beginning he did not want to attend the exercises, but then had a very positive experience in prayer. Finally, a young university psychology student told of how he had stopped praying as a result of reading the philosopher Nietzsche and during these exercises had been able to go to confession and resume his relationship with God.

The spiritual exercises of St. Ignatius of Loyola continue to produce much fruit. From these exercises we can say the same thing that Pope Paul III said: “The finger of God is here”.

Without a doubt, these days have been full of activities and of spiritual and material nourishment. We look forward to repeating them soon!