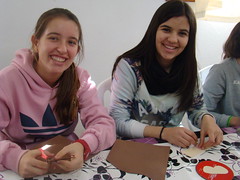 The day commemorating the Chair of Saint Peter was chosen to have a gathering for girls in Torrent, focused on Lent. We started by getting to know each other and exploring the house because for most of them it was the first time that they had come over. We had some time for fun games along the corridor. We were getting warmed up even though the outside temperature was a little cold. It was great to see smiling faces and the laughter that filled the house. 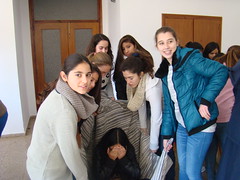 Next we did a craft, which consisted of making funny photo frames with CDs. Then there was more time for fun, this time with a game about Lent in which we talked about temptations, the resurrection of Lazarus, the man blind from birth, the Samaritan woman, the Good Samaritan... All of them very proper evangelical scenes of this liturgical time. A marvelous occasion to learn and to remember things while we played.

One of the most intense activities of the get together was the time for reflection and veneration of the Cross: The girls took turns kissing the Cross and placing at His feet the reflections that they had previously written on a piece of paper. 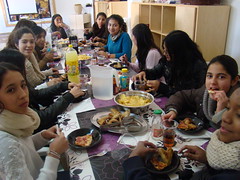 Once out of the chapel, they were able to watch a short video on the Passion that questioned them about their lives and encouraged them to respond to Jesus with love, seeing all that he had shown us by dying on the Cross.

As the stomachs were already ‘complaining’, we proceeded to eat and we did it very well because as soon as the plates made it to the table, the food disappeared from them: what a good sign! At the end of the meal and while still sitting at the table, the games continued.

We then went to watch a video about Chiara Luce, the young Blessed Italian, who is an example for all Christians in general and girls in particular. We encouraged them to see her as their friend. Then there was a commentary about the video and then we ended the get together with the grand finale, the celebration of the Holy Mass.