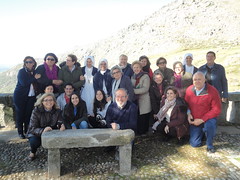 On the occasion of the Teresian Jubilee year that we are commemorating in 2015, and given that Saint Teresa is one of our great protector saints, the Home of the Mother of Seville wanted to take advantage of this occasion to travel to Ávila from April 10-12.

We began the pilgrimage on April 10, very early; we left from Alcalá de Guadaíra, our town, at 8:00 in the morning, heading to Arenas of St. Peter, in the province of Ávila. We were full of hopes and intentions. To start the trip under the protection of Our Mother, we prayed the morning prayers and Lauds. The trip felt like a short trip, because we took the opportunity to talk, tell jokes, pray the rosary, sing and even write a sevillian song to share with all the others the next day in Ávila. 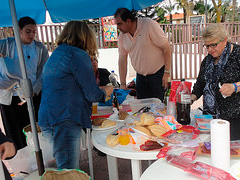 We arrived at our destination at 2:30 in the afternoon, just in time to eat. The Alcantarinas Franciscan sisters welcomed us with much kindness, to the house where we were going to spend the night. After we took out all the food that we had brought with us, we tried to eat quickly, because the Discalced Carmelite Sisters of the same village were expecting us at 4:30 p.m.

We walked to their convent very excitedly, because for many it was the first time they had spoken with Carmelites Nuns. We stayed with them for about half an hour. They sang for us and transmitted to us the peace and joy of God. They were also very generous with us; they gave us crosses made by them, with the saying: "He who has God lacks nothing, Teresa of Jesus". With our hearts set on God we said goodbye and entered into the chapel, where we said some prayers to earn the indulgence. 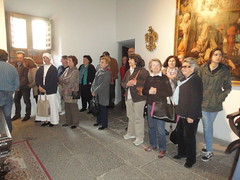 Upon leaving, we got on the bus to go to the Sanctuary of St. Peter of Alcántara, which is a Franciscan monastery. We were welcomed by a priest who guided us around the Museum and took us to the hermitages inhabited by St. Peter of Alcántara. At the end of our tour, he celebrated Mass for us in the chapel and we were able to venerate the relic of the Saint. Then we returned to the house of the Alcantarinas for dinner. Then, those who wished went for a walk to see the castle of the village.

The next day, we ate breakfast and we headed to Ávila. Along the way we made a stop at a beautiful place where we could see the Roman road, and we spotted a herd of mountain goats. At 12 noon we arrived at the Monastery of the Incarnation in Ávila, where we met with Father Rafael, some Servant Brothers and Sisters, lay people and young people of the Home of the Mother. There, we visited the museum of St. Teresa, which holds some relics and some writings, clothing and objects used by her. On leaving the museum, we had the grace of entering the chapel of the transverberation where we prayed and Father said a few words to us. 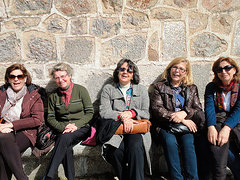 We then returned to the bus and went to the hermitage of Our Lady of Sonsoles, patron saint of Ávila, where we ate, and shared what each had brought and we had a great afternoon. When we finished eating, some girls and ladies started to dance, and sang the sevillian song we had written for the occasion. We then picked up our things and walked into the chapel to pray the rosary all together.

Afterwards we headed back to the city of Ávila to celebrate Mass in the very primitive chapel of St. Joseph’s convent. Although we squeezed in very tightly, because it was a small place, it was a lovely experience. At the end of Mass, we said good-bye to the rest of the group which had to leave. We made our way to where we were staying. We had dinner there and then, whoever wanted to, went out to get to know the city a little better. 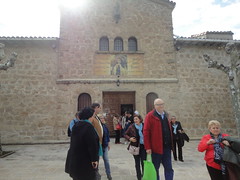 The last day, it was Divine Mercy Sunday; we had breakfast and went to visit the birthplace of St. Teresa, where we had the grace of hearing Mass. We also visited the museum that is located right there, where they still have a finger of St. Teresa and other of her relics. Then we walked to the Cathedral of Ávila. We then headed to Alba de Tormes, where we found an ideal place to have lunch in the shade.

As we were running out of time, we started our way back home. On the bus, recalling the trip with eyes of faith, we gave thanks to God for everything we had lived and we prayed the rosary. Then we turned on the microphone so that anyone that wanted would be able to share their testimony, and in the end we all talked. We realized how Our Mother truly is among us and how she had planned the trip. At the rest stop, we gathered together to share our experiences, including the bus driver. We laughed with tears in our eyes. At 11 o’clock at night, we arrived at our beloved town of Alcalá de Guadaíra with our hearts and souls full of grace and joy.