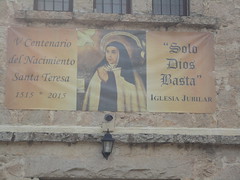 On Saturday April 11, on the occasion of the Fifth Centenary of the birth of St. Teresa of Jesus, protector of the Home, some Servant Brothers and Sisters of the Home of the Mother, a good group of lay people and several young people led by Father Rafael, went to spend the day in Ávila.

The day began around noon at the convent of the Incarnation, the agreed meeting point in which we met up with more Servants Sisters, lay people and young people of the Home who came by bus from Alcalá de Guadaíra.

We visited the Teresian Museum housed in the convent where the Saint remained almost uninterruptedly since 1535-1574. Here, we could contemplate some very unique places that witnessed the mystical experiences of St. Teresa, such as the ladder in which the baby Jesus appeared or the Chapel of the Transverberation. 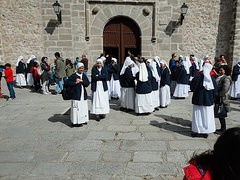 When we were done, we went to the Shrine of Our Lady of Sonsoles, also in Ávila, to eat together, sharing the dishes that we had taken and to have some fun time together, with lots of laughs and dances with Andalusian flavour. Afterwards we went into the sanctuary to pray the Rosary in front of the beautiful image of the Our Lady with the Child Jesus in her arms.

Finally, we returned to the center of the city to visit the convent of St. Joseph, the first convent founded by St. Teresa, where Father Rafael celebrated the Eucharist together with Father Félix. It was a grace to be able to attend Holy Mass in such a special chapel. Afterwards the scapular of Our Lady of Mount Carmel was imposed on anyone who wanted it, taking advantage of the fact that we were in the bosom of the Carmelites. 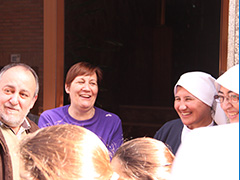 The tour through Ávila was coming to an end, but we did not say goodbye since the next day we spent the day in the city of Toledo, very important place in the history of the Home’s beginning.

On Sunday we were at the "El Greco" institute and we began to explore the city with some exceptional guides: Father Félix, Mother Ana, Sister Reme, Fernando and Sagrario, all of them from Toledo who lived the beginnings of the Home of the Mother. We were able to see very special places for the Home: the above named Institute where Father Rafael taught, the hermitage of St. Anton where the Eucharist was celebrated every day, the house where Don Rafael lived with Mamie and various places where the young people gathered in the beginnings of the Home. This experience made us feel fortunate to be able to know the seed of this work of our Lady which is increasingly growing more and more.

Finally, Rafa and Esmeralda, lay members of the Home of the Mother, invited us to eat at their house, whose doors were opened wide, serving us gladly. There we shared experiences and we recovered from a day full of excitement

We give thanks to God and Our Mother for allowing us to visit these two important places for the Home. We really enjoyed both the Carmelite spirituality in Avila, as a reminder of the first steps of the Home in Toledo.