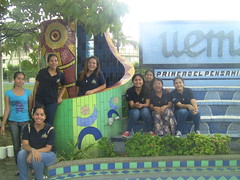 Celebration of the anniversary of the HMY female branch. July 26, 2015. Guayaquil (Ecuador).

This year the anniversary of the HMY, 29 of July, fell on a Wednesday and hardly anybody could participate in the mid-week celebrations, so we decided to organize the celebration on Sunday, July 26. For this purpose we held a get-together with the girls.

It all started with a mass at 8 o'clock in the morning in the parish of Our Lady of Loreto and then we had time for Eucharistic adoration. Then we went out walking towards the House of Servant Sisters, in the Citadel of the Condor. There, after spending time singing and some dynamics, we made groups and started to prepare cookie cakes and chocolate bonbons with cereals. They all looked so scrumptious that we almost ate them before it was time, thank God we waited until it was time to eat them. 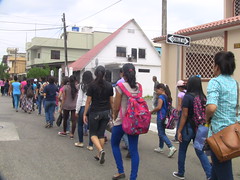 At about 11:45 a.m. we left with our food on an excursion to a school that, kindly let us use their sports facilities to spend our day with games there. The first thing we did upon arriving was eat, because after the hike, we had worked out an appetite and it seemed that we had lions in the stomachs with so much growling, so, again separated in groups, we decided to lighten the luggage that we had brought. The next thing was to overcome the game of tests, as the girls were finishing they sat in one place in groups with their eyes closed, then a sister would place a bracelet with the image of the Virgin Mary in their hand. That symbolized, in some way, that they committed themselves to live their life in such a way that the Virgin could watch them at any time.

To finish and make good use of the courts, we had a game of soccer or volleyball, and as it began to rain, we saw that as a sign that it was time to return home. And we went back home, walking in the rain. Luckily here in Guayaquil is not cold and the rain is hot. When we got home, we dried ourselves immediately while eating our desserts that we had left in the fridge so that they would jell. They were delicious! 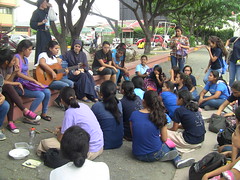 We also remembered all the good moments lived during these years since the Home came to Guayaquil. We had prepared a slide show with the best moments of the different activities. It was very nice to remember all the graces received in different places and times.

Another thing worthy to remember on this day, was the moment when a sister called up the groups and, one by one they passed thru a small cave that had been prepared at the entrance of the House of the sisters with the Virgin Mary inside. The girls had to first enter the Chapel and hence would be passing one by one to the small "cave" to say something personal to the Virgin, and at the end there was a table with cards in which the Virgin told them something in return.