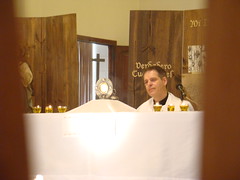 Get together of the Home of the Mother in Torrent, Valencia (Spain), September 26, 2015.

On Saturday, September 26th, the Home of the Mother held the first gathering of this year in the house where the community of Servant Sisters live in Torrent, Valencia. We were filled with joy by the numerous participation of attendees; between families with children, young people, Servant Brothers and Servant Sisters, we were more than 50 people, of whom a considerable number was participating for the first time.

We started at 11:00 o'clock with exposition of the Blessed Sacrament and a few points of meditation about the Gospel of the prodigal son. The theme of the day was going to revolve around the Divine Mercy, to mark the occasion of the Holy Jubilee Year that the Church will inaugurate on December 8.

After adoration, the children went with two sisters to have their own activities: meeting, prayer, crafts, theater, etc.; the teens had their formation meeting; and the adults watched a video about the persecuted Christians, followed by a meeting. 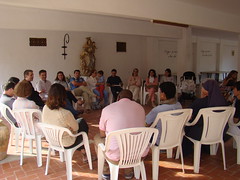 At 1:00 in the afternoon, the celebration of the Holy Mass took place and then there was lunch, in which we celebrated the sixth anniversary of the priestly ordination of Fr. Reinhard, SHM.

After a moment of fraternal sharing, we prayed the Rosary with songs, after which the adult formation meeting began on the topic of Pope Francis' “Misericordiae Vultus'. There was a lot of participation; in which we mainly discussed how to prepare ourselves to live this Jubilee year fruitfully.

To finish, the children had prepared a play on the Virgin of Guadalupe and the Indian Juan Diego, which was the delight of all, especially of the parents, who were captivated by their children.

We thank Our Lady for the time we spent in her Home and look forward to all that awaits us in the course of this year.