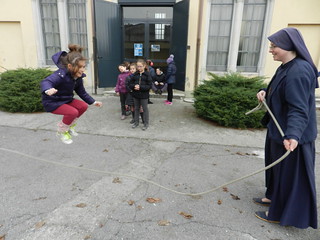 Girl’s get together in Brignano, Bergamo (Italia), December 5th, 2015.

On Saturday, November 5, 2015 we had a get together for girls in Brignano (Italy). We started with our traditional warm-up, adapted for these winter months which consisted in playing several games, including the now famous capture the flag or “American flag”, as they call it in these Italian lands.

After playing, we went to the chapel to have a moment of prayer in front of Jesus present in the Eucharist.

Then we went to make cookies (American cookies), which we would sell the following day in “The Christmas Bazaar” of the parish, a type of Christmas flea market in which all proceeds go to support the Italian missionaries who evangelize in Asia, Africa and South America. We also helped coloring a few American flags that would go into bags of cookies, with uplifting phrases of illustrious Americans. 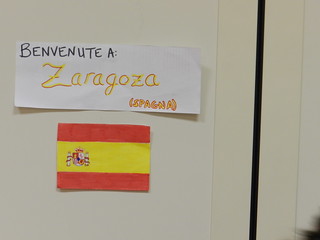 After lunch we had a meeting where we talked about Our Mother, whose feast we would celebrate three days later. Then we did an Advent workshop that consisted of making an empty crib, to remind us that we must prepare ourselves to receive the child Jesus.

Finally, we played a great game called 'Tour of the shrines', in which organized by teams, we did virtual tours of different Marian shrines in the world, learning a little about their history, and overcoming tests in each place.

We give thanks to Our Mother for this great day in her Home!