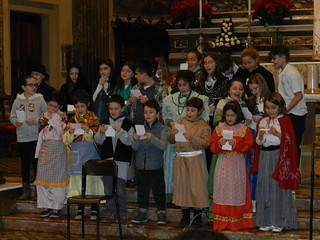 On January 6, 2016, we presented in the parish of Brignano, Bergamo (Italy) a great Christmas play, prepared by the children from the first to the fifth grade.

This year we have performed the play “A Christmas Carol”, a Christmas classic of the English author Charles Dickens. The play tells the story of Scrooge, a rich but selfish man, and therefore unhappy, living a bitter existence until one Christmas Eve he is visited by the ghost of his former partner, Marley, who warns him that he must change his way of life if he wants to avoid the sufferings that await him in payment for his indifference and selfishness. Marley says goodbye, telling Scrooge that he will be visited by three spirits. These spirits are of the Christmas past, Christmas present and future, and thanks to them, he will understand the urgency of a change of life. 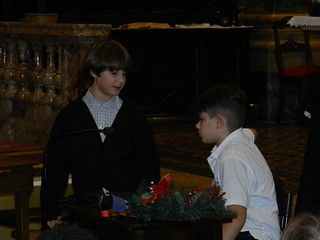 All of our actors did a marvelous interpretation of the play, they very much identified with their roles, especially the protagonist, Scrooge.

After the play, some money boxes made of cardboard were distributed among all the children present, even those in the audience, so that from their savings they could drop something in for the poor, imitating the generosity of Scrooge’s conversion at the end of the play.

We also took advantage of that time to hand out the prizes of the contest of the nativity scenes. Then our pastor, Fr. Luciano, blessed the children that were present with the image of the Child Jesus and all went up to kiss the image.

In short, it has been a very good occasion to celebrate the feast of the Epiphany and to remember once again the true spirit of Christmas.