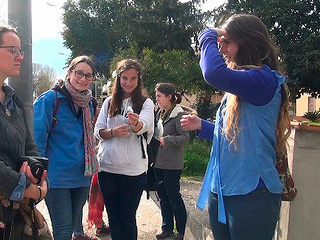 Pilgrimage with girls to the House and Tomb of St. María Goretti in Nettuno, Italy on March 12th, 2016.

On Saturday, March 12th, three sisters from the community of Rome went with a group of ten young women to visit the house (in Corinaldo) and place of death (in Nettuno) of Saint Maria Goretti - who died to defend her purity at only 11 years old in the early 1900’s – about an hour outside of the center of Rome. It was a very international pilgrimage, with representatives from 6 different nations: America, Italy, Pakistan, Ireland, Germany and France. We were able to communicate to each other speaking English, and had a great time getting to know each other, each with her own culture and background.

We first arrived at Nettuno, a large town 12 kilometers from where the family of St. María Goretti lived, where she was taken to the hospital after being stabbed 14 times by Alessandro Serenelli. There we visited the room where this saint died, which has been made into a chapel. One of the sisters gave points of meditation, explaining the life of this saint and applying it to our own lives. We then had a time of prayer. Before leaving, the guides showed us another room which had the furniture exactly where it was when she died. 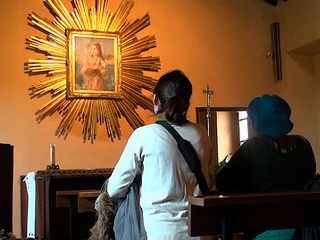 Afterwards we went to the visit the Shrine where her tomb is, and had time to pray and visit the museum of relics. When the bells struck 12, we prayed the Angelus together, and head off to the beach that is right beside the Shrine to eat our lunch on the sand.

We then caught the bus that would take us to the house where the family of Saint Maria Goretti lived and where she was stabbed to death, which is on the outskirts of the city of Nettuno, 12 kilometers away. The house is conserved as a place of pilgrimage. The family kitchen, which is the where she was stabbed, has been made into a chapel with the Blessed Sacrament. We were able to have a time of prayer, then went outside to have a meeting together, to talk about what we can learn from the example of this saint, and how young women nowadays must value the virtue of purity and be an example to others.

Although it was very interesting and uplifting, we had to cut off the meeting to go to the bus stop to once again catch the bus to Nettuno. There we would take the train back to Rome, and once there finish our pilgrimage.