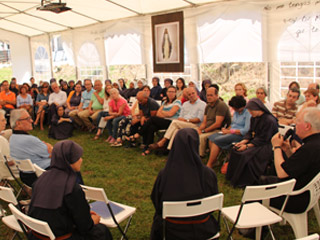 Like every summer, we held our Encounter of Families Centro-Hogar from the 12th of August through the 16th, with moments of prayer, formation, of sharing with others and much more.

Every morning, Fr. Rafael would lead us with the Gospel reading of the day, in a moment of personal prayer that helped start the day as God intended it, directing our first thoughts and reflections to the Lord. Next, after some free time, we heard our daily formation talk.

The formation talk of the first day was given by D. Alberto Bárcena, professor at the University San Pablo CEU in Madrid, with the screening of a video of one of his talks on the so-called “social engineering.” Professor Bárcena did not leave anyone feeling indifferent and listening to him made us open our minds to a new world, unknown to most mortals, since the ideas that he exposes usually do not appear in social media. D. Alberto explained how for years the devastating social policies we face today have infiltrated our lives, as well as of the change of mentality and the manipulation of the language involved, and how it has influenced our society in this time of prevailing confusion, especially in matters regarding the family and what is known as “gender ideology”. 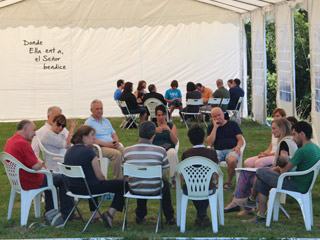 The next day, we had the honor of welcoming D. Juan Antonio Reig, Bishop of Alcalá de Henares (Madrid), who spoke to us about what happens to man when he separates God from its rightful place -which is the center- and puts himself first, and how this fact is sold to us as progress, as a social conquest. Then he made an interesting overview of the “isms” of the past centuries: rationalism, voluntarism, relativism, nihilism, totalitarianism, trans humanism, anthropological dualism. Faced with all of them, the Archbishop talked about the need to return to Theocentrism, to the sacramental ontology, which is to accept the risen Christ living among us.

But, what must we do to achieve this? He gave us the following recommendations: take our formation seriously, let God act in all areas of our life and have a strong missionary push, starting with our family. Finally, he strongly advised us to carefully read Ratzinger catechesis on “The New Evangelization”. 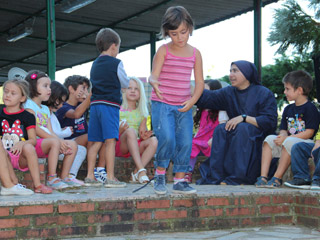 On the third day, the talk was given by Fr. Felix, Superior of the Servant Brothers of the Home of the Mother, who spoke to us about our vocation and the need to recognize the Christian life as such: just living it as a response to what God asks, with a total giving of ourselves, finding in this way its full meaning.

The talk ended by inviting married couples that were there to always live out their vocation to marriage relying on the support received by the grace of the sacrament, to not neglect the small details, those that we lose gradually when we fall into a routine, to strive every day to rekindle the flame of love and of hope. And in between the talks, prayer, times for sharing, group meetings for reflecting on what was heard in the formation talk, joint prayer of the daily Holy Rosary, the Holy hour that Clara had prepared with such excitement on mercy handed down by St. Faustina Kowalska, and on the sacrament of reconciliation that brings to life this mercy... as in every year, the time was slipping through our fingers as our heart was swelling with everything the Lord and Our Mother were dropping in it. The 16th arrived, time to return home and put into practice in our daily life everything that we had received.