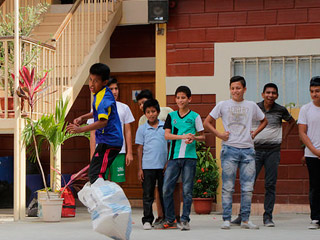 On Saturday, September 17, the Servant Sisters gave us the opportunity to have a get-together with boys in the “Colegio de la Consolata,” in the “Fortín” area where they give classes. Thankfully, we had the help of three member of the HMY: Juan Jesús Reyes, Eric López, and Brian Acosta. There were about forty boys waiting for us when we arrived. We divided them in four groups: two played a soccer game and the other two played other games. Later, we changed places.

We stopped playing to give them a talk when they got tired. It was a story about a lethal epidemic that had extended throughout the whole world. It seemed as if it were the end of the world. However, some doctors found one person who had pure blood that could cure the disease. Everyone was happy with this discovery. That person’s father, when he signed the authorization, found out that his son would have to give all of his blood. In the end, the boys discovered that the illness is sin, and that God the Father sacrificed His Son, who shed His blood on the cross. “For God so loved the world that he gave his only Son, so that everyone who believes in him might not perish but might have eternal life.” (John 3:16) This act of love continues at Mass, and we should therefore give thanks and receive Him in the Eucharist. 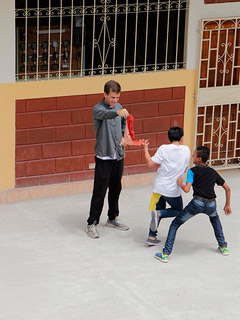 After the talk, we made small groups and each leader helped the boys to reflect on the story. Lunch time came around and we recharged our batteries. After lunch we had a craft. We made rosary bracelets with knots and a small cross. It was difficult for some of the boys, but they were finally able to their rosary bracelets. After the craft, we prayed a mystery of the rosary together.

To finish off, the four teams competed in a relay that consisted of wheel-barrow and piggy-back ride races, potato sack races, and other challenges such as having to carry a small ball with a spoon or having to get from one place to another by rolling on the ground. Everybody had a great time. Finally, we had to say goodbye, but we encouraged the boys to participate in the next encounter.