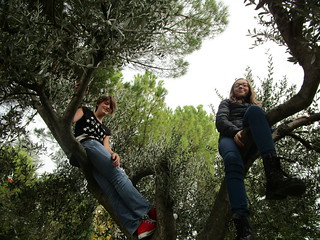 During All Saints Day weekend, the communities of Servant Sisters of the Home of the Mother in Lumezzane and Brignano held a get together for girls in Brignano. The theme was “No Fear Saints.”

On Saturday night, we began the encounter with ice breakers to get to know each other.

To introduce the theme of the encounter, we had a group discussion on holiness in which we saw a video from the Home of the Mother Youth website with images of various saints, to encourage the girls to follow that ideal and make them understand that they are also called to be saints. 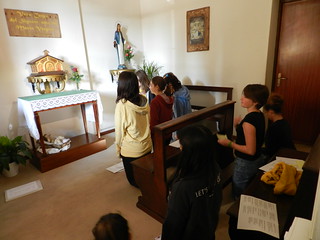 Later, we played a night game based on the board game “Clue.” The girls were divided into teams and had to decipher which saint had appeared, in what location, what message he or she had brought, and to whom he or she had appeared. When the game was over, we ended our day singing the Salve to Our Blessed Mother.

The next day, Sunday, the girls went to the chapel after having breakfast to spend some time in prayer before the Blessed Sacrament. Afterwards, we all went to Mass in the town’s Parish. After Mass, we played a game in which the girls had to go all throughout the town to find hidden clues on the lives and quotes of different saints.

Throughout the day, we had more activities, such as crafts and games. There was another group discussion in which we talked about Valeria from Playa Prieta. Getting to know her really helped the girls. They admired the fact that, though she was so young, she was able to lead a life full of faith, joy, friendship, and service.

What impacted them most was that she was capable of being “where she had to be, doing what she had to do and always with a smile on her face.” The girls participated a lot in the group discussion and were very enriched by it. Before having dinner, since it was the night before Halloween, we spent time in adoration with the exposition of the Blessed Sacrament in reparation for the offenses committed by many against the Sacred Heart of Jesus, especially on that day. 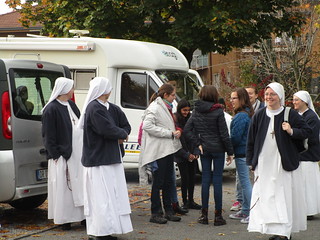 That night, we also had a movie session and saw “The Ultimate Gift”. This movie really helped the girls understand that happiness is not found in material things—neither in possessions nor in money— but through the giving of oneself in the service of others, starting with small things. Monday was the last day of the encounter. We left for Caravaggio very early to have Mass in the Madonna della Fonte Shrine (Our Lady of the Spring). Then we went to Sotto il Monte in Bergamo, Pope John XXIII’s birthplace, and visited the house where he was born. We left and walked along the mountain close to the town to have our picnic and eat the sandwiches we had brought. We also played some games, sang songs, and had a closing group discussion.

The girls were very happy and thankful at the end of the encounter. They received a lot from Our Lord, from Our Blessed Mother, and, of course, from the help and intercession of all the saints.