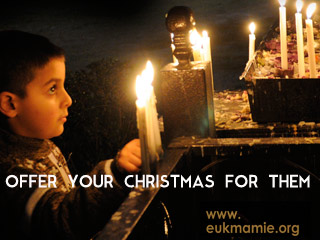 An EUK Mamie/H.M Television project to help support the persecuted Christians this Christmas with our prayers and our sacrifices.

The Foundation EUK Mamie – HM Television has been working for years to make known the terrible persecution that millions of Christians are suffering in different parts of the world, especially in the countries where Islamic fundamentalism extends it’s not only violent, but deadly shadow.

The commitment of the Foundation EUK Mamie – HM Television, to give a voice to the victims and witnesses of this harassment, has given rise to the Wake Up Project. The Wake Up Project is now creating videos and resources with various objectives:

In order to be closer to our persecuted brothers and sisters this Christmas, the Wake Up Project will publish a petition and prayer resolution for each day, from December 25th to January 6th, 2017. It is our Christmas present to our brothers and sisters that are carrying out a very hard battle to remain faithful to Jesus Christ. 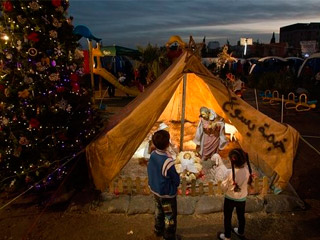 Each day, from December 25th to January 6th, you will find a new banner with the petition and prayer resolution on our webpage and Facebook.  Don’t let a day go by this Christmas without remembering our brothers and sisters who suffer for their faith. Do what the resolution tells you to do and make this campaign known. Let us diminish evil with an increase in love. Evil does not have the last word. The last word, and the definitive Victory, belongs to love.

Below you can see the banner designed for December 25th.

Just a few days ago, on December 15th, 2016, Monsignor Antoine Camilleri, the Under-Secretary for the Holy See’s Relations with the States, stated before the Organization for Security and Co-operation in Europe (OSCE), “The atrocities committed against Christians in Syria and Iraq are so horrific that words cannot adequately respond, and their plight must not be forgotten. ”. Let us not be the ones who forget our brothers and sisters.

From the Press Office of the Foundation EUK Mamie – HM Television, we want to wish you a holy and merry Christmas. Let us remember to meditate during these days, on the overwhelming mystery of the “closeness of God to humanity” (Pope Francis December 18, 2016).

May the Christ Child bless you all.