On February 12th, the Servant Sisters of the Home of the Mother founded a new community in the parish of St. George the Martyr in Turin, Italy. There, our four communities in Italy gathered with Fr. Rafael, Mother Ana and Sr. Reme.

The day before the foundation was spent pilgrimaging to places having to do with the life of St. John Bosco. In the morning we visited his birthplace Castelnuovo, a small chapel dedicated to Our Lady, Help of Christians and a grand basilica where a relic of the saint is conserved.

Once we arrived, our first stop was a visit to the basilica. Later we headed towards St. John Bosco’s birthplace where we were able to see the museum with the house’s rooms and several of the saint’s photographs and memories. Following the visit to the museum, we celebrated Mass in the chapel dedicated to Our Lady, Help of Christians. Fr. Rafael encouraged the sisters destined to the new community to not shrink back or let room in for sadness, but to give totally of themselves, always remembering that the Virgin Mary is with them. He told them that their presence in the new community would be justified for the sole conversion of one person. He also reminded them that their fundamental task is to be with the Lord and to go where He sends them. 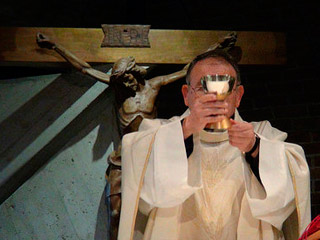 In the afternoon we went to the Basilica of Our Lady, Help of Christians, erected in the city of Turin annexed to the Salesian complex where St. John Bosco rented the first places where he began his work of evangelization with the young people. We visited the tombs of St. Dominic Savio, St. Maria Mazzarello and St. John Bosco. From there, we went on our way to the Pinardi Chapel, erected by St. John Bosco himself.

A Salesian coadjutor invited us to visit the saint’s rooms and told us several anecdotes and stories about St. John Bosco. Through his hospitality we experienced that St. John Bosco was welcoming the new community of sisters to Turin.

Lastly, we visited the St. Francis de Sales Church, were St. Dominic Savio once had an extasy of several hours after having received Holy Communion. The place of the extasy was closed, but we providentially ran into the rector who opened it for us and explained some things about the life of St. Dominic Savio. He told us that St. Dominic, in his desire for perfection, began to do certain penances without consulting, such as putting walnut shells under his sheets to be uncomfortable. When St. John Bosco found out, he told him that his penance had to be that of always being joyful. He defined holiness using St. John Bosco’s words: joyfulness, fulfilling one’s duty and prayer. 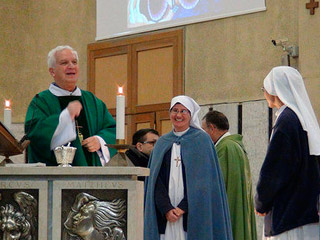 On February 12th, the Sisters were presented to the parish at the Mass presided by the Parish Priest, Fr. Carlo Bertolo and concelebrated by Fr. Rafael. Some members of the Home of the Mother from Lumezzane, province of Brescia, also accompanied us and were present at the foundation.

At the end of Mass, Fr. Carlo introduced the four Sisters who are going to form the community to the Parish: Sr. Sara, Sr. Caroline, Sr. Jessica and Sr. Hope. Then he invited Mother Ana to say a few words to the faithful. To begin, she thanked Fr. Carlo, the coadjutor and everyone present for their warm welcome and for having made the effort to learn songs in Spanish for the Mass. Then, she said, “We come with a lot of hope and with the desire to work. When we arrived, a group of young people from the Oratory came to greet us. Fr. Rafael asked them what they expected from the Sisters. One boy said that they hoped that the Sisters would help them in the Oratory and that they could get to know the Sisters better and their history. Fr. Rafael then asked Sr. Sara what she expected from the young people. She responded that she hoped that they open their hearts to the Lord and that they help bring other young people to Jesus. When I thought about what we could contribute to the parish, the word that came to me was, "hope." In a world where it seems as if there is no place for God, like Fr. Carlo said, we, through our lives, want to shout that there is hope, that God exists, and that it is worth it to give your life to Him.” 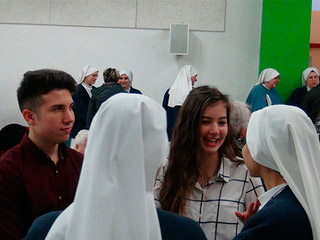 After Mass, there was an appetizer to which all of the faithful were invited. We had the opportunity to meet some of the members of the parish and to speak with them. Later we had lunch with a smaller group of the families committed more closely to the parsh.

We thank the Lord for this new foundation, the Parish Priest, Fr. Carlo, Fr. Sebastiano, the coadjutor and the whole Parish of St. George the Martyr for their welcome. We hope that Our Lord grants us the grace to be able to transmit that hope which Mother Ana spoke of.