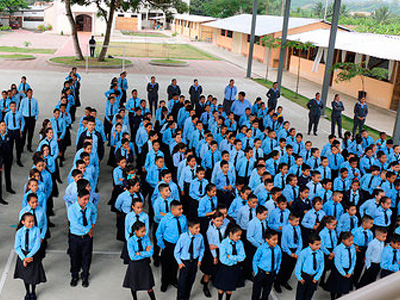 This seems to be what the Lord tells us constantly here in Playa Prieta. We have no doubt that God loves this school and that it is His will that it exists. He never ceases to stir hearts so that the souls formed in it have a complete and proper formation. One could think that a few months after the earthquake the aid for the reconstruction of the school and the house of the sisters would come to an end... Or that the culmination and the end of the benefactor’s contributions would have their deadline on the anniversary of the above mentioned event. The months have passed, we celebrated the first birthday of our sisters in Heaven, and the aid does not stop reaching these tropical lands.

After completing the work of the basic infrastructure, all of it was possible thanks to generous donations, there were the add-ons: library, chemistry lab, the channeling of all the roofs to avoid damage in times of heavy rain, etc. The idea was to do them little by little, whenever we could, year after year. But, the Lord is in a hurry to get everything done as soon as possible. About three months ago we received an e-mail from Cristóbal, a lay member of the Home of the Mother, asking us for a quick project that Telefónica could do. 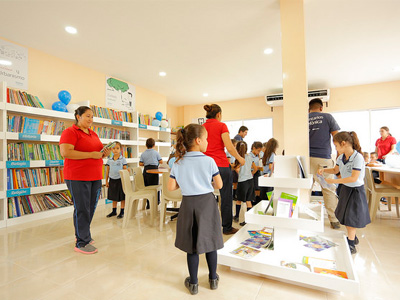 They wanted to continue helping us. Very quickly we requested the library. A few days later an answer from the person responsible for this project arrived. He turned out to be a former librarian, who was passionate about books and culture. He was excited about the project. The last week of August the volunteers from National Telefónica of Ecuador arrived and soon thereafter we had a beautiful library. The students' faces were worth filming. They were happy and very excited to use it as soon as possible. A girl said, “How beautiful, I've never been to a school with a library!” 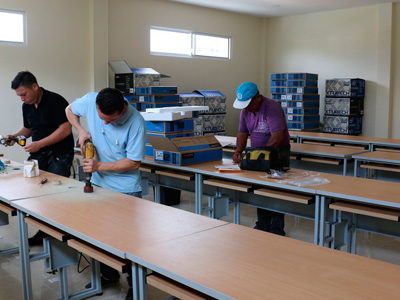 After providentially visiting the University of Calceta and they had shown us the process of making cheese, yogurt, ice cream, etc., we thought about building a chemistry lab. This would be great for our students, because afterwards it would be a way to gain a living for them and even for their families. But things were up in the air. It was just a beautiful dream, something in the distant future perhaps... The following week a friend from Guayaquil called us asking for a project, because they were going to hold a big event to raise money for social assistance and they had thought about our school. We told her about the lab, and what we had in mind. She got so excited that she began to investigate and think thoroughly about everything necessary to carry it out once the event ended.

Today, September 22, anniversary of the founding of the Servant Sisters of the Home of the Mother, we received a call from the U.S. It was a lady that is very interested in our work in Playa Prieta. She asked for information on what we needed so that she could make it her own by helping us. We talked about everything we already had and what we lacked, especially putting gutters in all the classrooms before winter arrives. All she wanted was a work estimate to start the job. What do you think about all of this? How can we not share something that leaves us speechless? 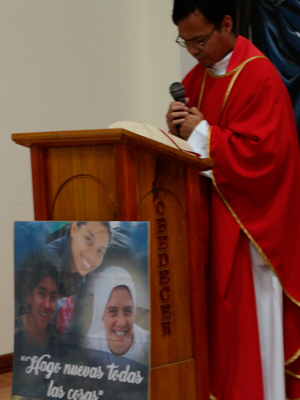 We feel that all this is like an icon of God's caress. After experiencing a painful injection that was for a greater good, His caress of love and consolation becomes visible and palpable at every moment. As our dear St. Martin of Porres says, “God gives the wound and the remedy to cure it.” This is our God, much greater than any difficulty, than suffering, than pain... We, His poor children, who do not understand His ways, should take a position of trust because His caress soon arrives. We will live with this God for all eternity. Do you not prefer Paradise to everything else? We do. Trust, patience, hope.

Thank you very much to all!!