Epiphany celebration with Home of the Mother members in Alcala de Henares, Spain on January 6, 2018. 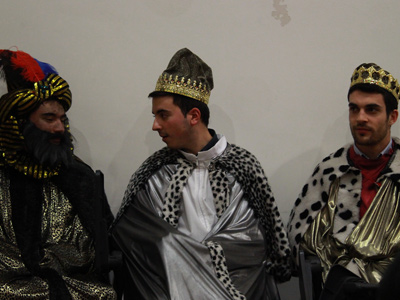 On the Feast of the Epiphany, January 6, we held a celebration in the Servant Sisters' house in Alcala de Henares with members and friends of the Home of the Mother. We began with a Rosary with Christmas carols after each mystery.

Afterwards, we were told that the Magi were trying to come, but they couldn't find the stable. They were lost because the star had disappeared due to the clouds and the rain. In order for them to find us, we had to make a stable! So we dressed up as the Holy Family, the shepherds, etc., and sang Christmas songs until the Magi appeared bringing gifts for the Child Jesus and those present in Bethlehem. 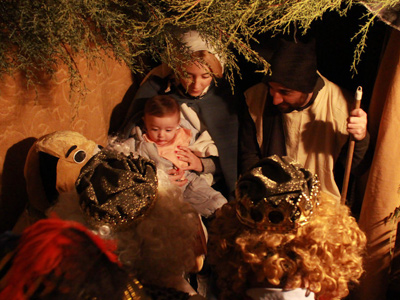 Their treasures were not gold, frankincense, and myrrh, but rather a quote, saint, and virtue as the year's gift for each person who was present. Later, we attended a magic show, in which the magician did some impressive tricks. Afterwards, we shared some food, the quotes the Magi had gifted us, and said farewell to Sr. Paqui who was on her way to Ecuador.

It was a beautiful, family-like afternoon, filled with innocent fun and joy! We pray that, through the saints' intercession, this year we may live out the virtues and quotes the Magi gave us.