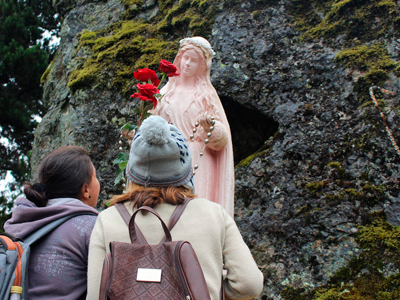 From May 24th-27th the communities of Servant Sisters in Ecuador and a group of girls got together for a pilgrimage. Our objective was to go out and meet the Virgin Mary. To our joy and surprise, she came out to meet us at each place we visited. She made her motherly presence felt very strong in one way or another.

We left from Chone and Playa Prieta on the 24th with two buses on their way to Guayaquil. We spent the night there and the Sisters and girls from Guayaquil awaited our arrival to join us for one day of the pilgrimage. The next day, we continued our journey to Cuenca with two additional buses of girls from Guayaquil.

Our first stop was the Sanctuary at Cajas—we wouldn’t have it any other way. The Virgin Mary manifested herself there as the Guardian of Faith.

After we were there for a while before her statue, praying and singing, we went to Mass and then had lunch. After lunch, there was time to share experiences, tell stories, sing songs, and share testimonies— all quite informal, yet very enriching. Following this group discussion, the girls and Sisters that had come from Guayaquil had to leave. The rest of us continued our trip to Cuenca where we lodged at the retreat house of the Dominican Sisters of the Immaculate. 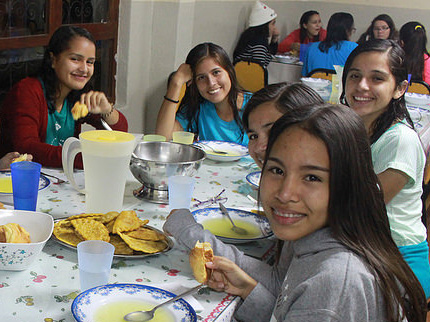 The next day, we visited the old Cathedral in Cuenca City, which is now a museum. At every place we went, it seemed like Our Lady was always with us. Before all of her beautiful images, we were inspired to sing as a way of showing our love for her and bringing everything in our hearts to her.

Afterwards, when we wanted to visit the current Cathedral, we had to change plans because it was closed to visitors at that time. So, we went to the Carmelite’s Church and arrived just in time for Mass. We went to Mass and afterwards visited the Cathedral, even though it was almost closing time. It was a gift from Our Lady and she received us in her house.

We were able to visit the towers and after a short explanation we approached the altar where they were preparing a large statue of the Immaculate Conception. Just like we had been doing in all of the places we visited, we took out the guitar and began to sing one song after another.

The rector of the Cathedral came and happily told us that we arrived right when they were bringing Our Lady down from the altar (which had not been done for 50 years) because the following day they were going to celebrate the anniversary of her crowning. He told us that there was always a serenade for Our Lady but that this year they had to cancel. But it was obvious that Our Lady wanted a serenade and so she brought us there for it. It was a very beautiful moment in which she made her presence felt once again, not only to us but to everyone who was there. 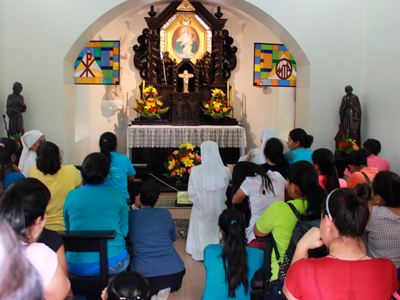 In the afternoon, we went to visit the monumental shrine of Our Lady of the Cloud, situated in the highest part of Azogues City and taken care of by the Franciscan Fathers. Aside from the beauty of the place, once again we also took away an unforgettable experience of the Mother of God.

Back at the retreat house of the Dominican Sisters of the Immaculate, as we prepared dinner, we had some time for games followed by a very uplifting meeting talking about the life of Blessed Angela Maria Autsch: a Trinitarian who was arrested and taken to the concentration camp in Auschwitz where she died after having done a lot of good to her prison mates who called her “the Angel of Auschwitz.” After the meeting we had dinner and went to sleep.

The next day, we woke up early to go to Mass at the Cathedral and say goodbye to Our Blessed Mother before making our way back home. Once on our way, we felt inspired to stop once again and say goodbye to Our Lady of Cajas. There, some girls renewed their commitment in the Home. Then we continued our trip back to Guayaquil with songs and testimonies about what Our Lady had done for each one.

We finished our pilgrimage at the Shrine of Our Lady of Schoenstatt in Guayaquil, where each one left to go back to their city. We prayed and sang to Our Blessed Mother with a grateful heart, thankful for all the graces we received. She not only welcomed us at each place we went, but we felt her presence accompanying us in our midst during the entire pilgrimage. It was truly time spent with her.